by April Thompson
The global Slow Food movement is fast gaining momentum, uniting more than 100,000 people in 150 countries with a shared passion for delicious food and a moral conviction about the people and places that sustain it. It satisfies foodies’ hunger for a deeper appreciation and understanding of their meals’ origins, from farm to fork.
“The key principles of Slow Food are good, clean and fair,” says Laura Luciano, a board member for Slow Food USA and Slow Food Governor for New York State. “It’s the opposite of fast food, where you are in and out with no idea where your food comes from or the stories behind it.”
Fair, says Luciano, means fair to farmers, and paying a fair wage to workers picking and growing food. “Fair also incorporates principles of equity, inclusion and justice. Good means good for the climate, the Earth and us as individuals. Clean means not using GMOs and pesticides in the food,” she explains.
Slow Food has its roots in Italy, where food and wine journalist Carlo Petrini took up the cause in 1986 to halt the homogenous fast food chains encroaching on the country’s rich, diverse food culture. Slow Food USA has taken off since its founding in 2000 with 150 chapters boasting 6,000 members nationwide. Many convene annually at Slow Food Nations, a food festival for all in Denver, to swap stories, share strategies, celebrate victories and of course, break bread together.
The backbone of the movement is its local chapters. “Food has a regional identity, connected to history, culture and family,” says Luciano, whose blog Out East Foodie shares the stories of her Long Island edibles.
For Bob Quinn, an organic wheat farmer in Big Sandy, Montana, and the founder of the heirloom grain company Kamut International, the Slow Food movement has been a kind of welcome homecoming and acknowledgment of his company’s efforts to protect workers and nourish consumers.
“To me, Slow Food is a return to the roots of agriculture and the soul of organic, because it focuses on the food—the end purpose of agriculture—rather than profits and yields that are the focus of the industrial food system,” says Quinn, author of Grain by Grain: A Quest to Revive Ancient Wheat, Rural Jobs, and Healthy Food. “Slow food offers an appreciation for farmers’ efforts to improve the soil and the nutrition, flavor and aroma of the foods we grow.”
The Slow Food movement also connects producers like Quinn with chefs like Steven Satterfield, author of Root to Leaf: A Southern Chef Cooks Through the Seasons and board vice president of Slow Food’s Atlanta chapter. “As a chef, Slow Food to me means honoring your ingredients and going out of your way to get the freshest, most sustainable, seasonal ingredients,” says Satterfield, who came to Slow Food early in his career as a young line cook interested in the provenance of food and protecting its cultural heritage.
At Miller Union, Satterfield’s award-winning Atlanta restaurant, all dishes are made from scratch, mainly from farms in the region, to support seasonal eating and local growing. Satterfield’s dishes also feature traditional Southern varieties from Slow Food’s Ark of Taste, a catalog of more than 200 culturally significant foods in danger of extinction. One Miller Union favorite is a hummus made from sea island red pea and benne seeds, an ancient variety of sesame originally brought by slaves from Africa to the South Carolina coast and cultivated in hidden gardens as a staple food.
Beyond engaging diners, chefs and producers, Slow Food also campaigns for big-picture policy changes, like farm-to-school programs to introduce fresh produce and get kids excited about healthy eating, says Luciano.
“Eating is a political act. The choices we make speak volumes about what we stand for,” says Luciano. “We talk about joy and justice. There is the joy in food and the justice and stories behind it. Slow Food tries to marry both of those worlds.” 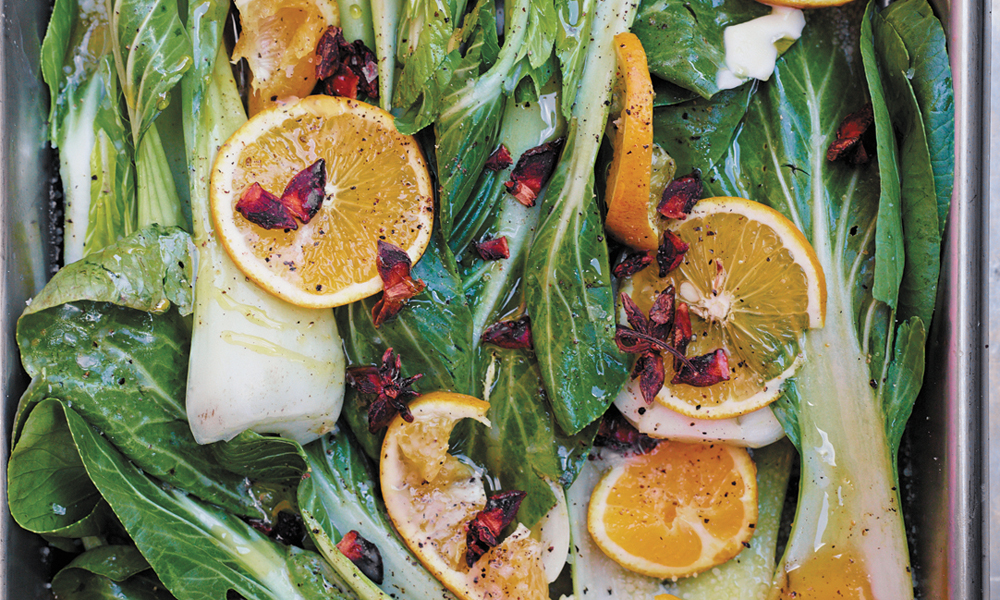 One of the qualities I love about bok choy is how easily the crisp rib absorbs the flavors of whatever it is cooked with. If it is not closely monitored, however, its tender leaves wilt quickly and the rib may turn mushy. I address this issue by quickly pulling the bok choy from the pan when it just begins to turn tender and succulent, allowing the sauce to reduce and intensify on its own. This recipe is perfect with a rice dish or with a delicate fish that could be poached in the cooking liquid for a full meal.

Simmer the stock in a large, wide skillet or shallow braising pan over medium heat. Squeeze the citrus into the pan, then drop in the peels.

Add the butter, star anise, peppercorns and salt, and bring back to a simmer.
Place the halved bok choy cut-side-down in the pan in a single layer.

Continue to simmer over medium heat until the bok choy is tender, but still has texture and bright color, about 4 minutes.
With a slotted spoon, remove the bok choy and set aside, but leave the citrus peels and spices in the pan.

Continue to simmer until the broth is reduced by half or more.

Taste the sauce for seasoning, then at the last minute, return the cooked bok choy to the glaze and reheat all the way through. 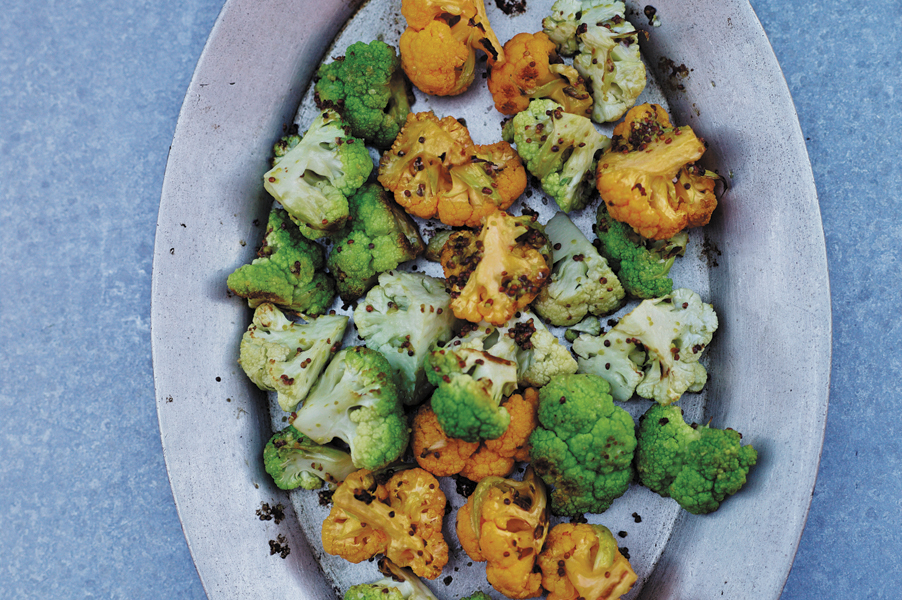 Cauliflower and mustard are both members of the genus Brassica, so it’s not surprising that the seed of the mustard plant is compatible with its big-headed cousin. Try it for yourself in this incredibly simple vegetable roast, which makes a terrific side dish with fish or fowl and is also hard to stop eating straight out of the pan. If you come across the orange, green or purple cauliflower varieties, mix them together for a stunning presentation.

In a large mixing bowl, stir together the mustard, garlic, salt and pepper.

Whisk in the olive oil.

Toss the cauliflower in the mustard mixture to coat.

Spread in a baking dish in a single layer and roast until it’s just tender and lightly browned on the edges, 20 to 25 minutes.